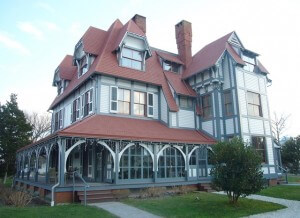 The Tennessee Wraith Chasers are off to the beach in Cape May, New Jersey to check out what they believe to be open portals brought about by the Spiritualism movement on the late 1840s. With all the death related to the war, people were quick and eager to use any means to contact their departed loved ones. Chris also believes the high level of quartz in the beach sand helps conduct the spirit energy.

Their main point of interest is the Physick Estate. It has been left empty for decades as people are driven off by voices and footsteps. Craig, a local historian and medium, says the energy of Dr. Physick, Emilie, Isabelle and Frances, still linger in the house.

As they start a baseline sweep, Doogie feels something cold around his head. He says he is already starting to feel the presence of the entities.

The investigation takes place across four main rooms. Chris and Doogie start off in Frances’ room where they get some knocks and Doogie once again feels something cold around him.

Porter and Brannon go to Dr. Physick’s room where Porter believes he sees a man with glasses in the mirror.

Chris and Doogie then head to Isabelle’s room where Chris believes he sees cold fingerprints on Doogie’s neck.

They gather together in Emilie’s room, who would have enjoyed the idea of a seance and talking to the other side. They get a few blips on the meter and Doggie’s faulty flashlight turns on.

Day 2 sees them at the Cape May Fish Market, where the owner, Paula, believes she caught an apparition on a security camera. As Doogie looks around upstairs, he says he sees someone poke it’s head around the corner. This is also where Paula keeps a doll she found in a closet from the building.

Porter and Brannon hang out in the booth where the apparition supposedly appeared. They believe they get the word, “Hair”, in reference to people saying something pulls their hair when sitting in that spot.

They go upstairs to use the doll to try and communicate with a child entity that lingers up there. They line the floor with flashlights to make a runway leading to the doll. They ask for lights to go out, which they do, and they feel the candle is blowing in the direction of the spirit.

When reviewing footage of the night, they have two poltergeist moments. The first is an orb flying around. The second is a painter’s pole falling over. This act of gravity is the sure sign of a ghostly presence.

At the end of the two days they have gathered the following evidence, which to them, puts Cape May as one of America’s haunted towns:

Something in the mirror which wasn’t captured

A meter beeping on a billiard table

A stick falling over

With such frightening occurrences, it’s amazing Cape May has anyone visit!