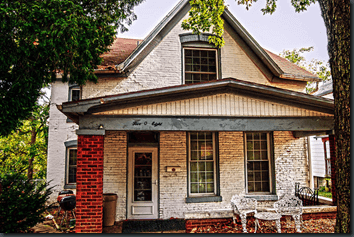 For this outing, we’re off to Atchison, Kansas to investigate the Sallie House, a house that is believed to be haunted, yet no one seems to know why. The previous owners (they used to live there 20 years ago) claim they dealt with an angry spirit for two years and were finally forced to leave. During that time they saw apparitions and Tony was scratched multiple times. When they left the house another owner took over and it’s "rumored" that she dabbled in the occult and was said to perform rituals down in the basement. This same rumor continues to be perpetuated by the Sallie House Tour Guide and she even goes so far as to say the dark, black smudge on the floor is where the pentagram used to be.

All right, let’s just hold up for a second. First, these are nothing but rumors. This sounds like the type of story kids would tell each other after the broke in to improve their machismo and scare other kids. Second, there is no evidence to support any of the "satanic" details that are being thrown around. Nor is there any evidence to support that the stain on the floor is anything more than a stain on the floor. As we later find out, the basement has mold problems. Clearly it’s damp and that may well just be a water stain. Third, there is a tour guide? Tour guide means money. Money means you’re running a business. In order to keep the business running you need to make sure you have visitors. Clearly you won’t have visitors unless you can come up with a really good haunted story about the place.

Does anyone else feel this whole investigation is a bit suspicious right out of the gate? Yeah, this whole thing feels like a scam before we open the front door. But we’ll put that aside for the moment and see what sort of evidence is collected.

Zak talks to several people in town and they all agree the Sallie house is haunted, yet none of them can really explain why. If there were Satanic rituals, those would have happened after Tony Pickman left the place. A police officer tells the story of coming to the house and meeting Peter James who claimed the house wanted the officer to leave. Again, there is no reasoning behind the haunting, but then we go with the old standby of Indian burial ground.

Tony, the previous owner, claims he was scratched multiple times in the two years he lived in the house. He says pictures would be turned upside down and his mind was filled with thoughts of violence and murder. He even admits to having thoughts of slitting his wife’s throat. Ok, so clearly this isn’t a bought of depression or some sort of reaction to a mix of drugs or perhaps some sort of reaction to the toxic mold growing in the basement. This must be the work of the demonic.

Before the actual investigation begins, Zak convinces Tony to come back to the house, even though both he and his wife have sword never to return. That didn’t take much coaxing did it? But that’s not all, they’ve brought in a psychic to give her impressions of the house. As soon as they all enter the house, the psychic says she feels the presence of a little girl, the same girl that Tony felt was trying to communicate with him.

True to form, a moment or two later, Jay is complaining of being scratched and a burning sensation on his arm. After a mad dash to remove his jacket we see the most minute of red spots of his arm. Oh no, a demon ate through the sleeve of his coat! Quick, the psychic needs to grab her head and appear to faint as to prove the distressing nature of the entity. Which she does.

But moments later, she’s fine as they all stand in the basement and a comment is made she’s standing on the "pentagram". This is most certainly another cue and they all begin to claim they feel ill and overwhelmed and something isn’t right. To build up the tension, the psychic then "faints" and in the commotion touches Tony, who then grabs the back of his head as thought something has grabbed him. Then we have the claim of a welt showing up at the base of his neck. Honestly, this entire sequence seems orchestrated – and quite poorly at that.

But with the actors out of the way, it’s time for the investigation. Things start off with Zak using his tricked out Kinect device that mysteriously crashes. Oh no, a device running Windows 8 has crashed? That’s totally unpossible!! This is followed by 3 knocks which is surely a sign of demonic forces mocking the holy trinity.

As they keep investigating, or rather as they keep soiling themselves at every noise the house makes, a camera captures a stuffed toy lean at an angle and tip to the side. But listen to how Jay describes the event. According to him, the doll is rocking wildly and spinning all around. Um, no sir. It tipped to the side and then started to fall back. Now, I admit, it’s pretty weird, but look at the doll. It’s completely floppy and far from rigid. Are you telling me there is no possible way it could have just tipped over on it’s own because gravity finally got the better of it?

But again, just listen to the exaggerated description of what happened. Despite what Jay says, the doll didn’t go flying around the room, it wasn’t spinning, it didn’t rock back and forth and defy the laws of physics. It slowly tipped over. And it should also come as no surprise that Zak finds and orb and labels it spirit energy. He’s sees those all the time now. So we have a faulty Windows device, a saggy doll and dust particles. It da work of da debil!

The investigation continues with Aaron and Jay down in the basement with a Tesla radio. This is supposed to pick up vibrations in the house. They even defy all common sense and sit right of the black mold, also know as a pentagram. And guess what? Nothing happens. But when Jay goes into the crawlspace, the radio starts to make noise. It’s not really indicative of anything, but if something makes noise in the dark, it must signal the paranormal.

Zak and Billy hang out in the living room and play with the Paranormal Puck. As they type questions, they get answers that make them cringe. The device again says "Satan". It said this back at the hotel when Billy was getting set up. It only has a dictionary of 5,000 words, so how could it possibly choose Satan?

Also, when asked who moved the bear, they get the answers Monica and Paula. We have no idea who these two are, but clearly this answer is important! We also get clued in to the fact that the house conveys a lot of noises. Aaron hits a pipe and it sounds like piano keys playing. This just proves sounds can come in and make it seem like the events are happening in the house that aren’t true.

But let’s get to the big finale, when Zak goes into the basement and then into the crawlspace. He claims to hear a female voice, panics and in typical fashion damn near pushes Aaron out of the way to make his escape. Based on this, Zak is utterly convinced there is a dark portal in the basement.

So in the end we have some seriously dodgy evidence and far too many things that make me feel like this whole event was set up to generate business for their house tours. A bear tipping over is not paranormal. Neither is a black smudge on the floor. Neither is faux fainting and clinging to some idea about Indian burial grounds. The house creaks and has some terrible plumbing. It has all sorts of rumors about the demonic that have no basis in truth. And all is this has something to do with a little girl? Even if not, there is supposed to be some big, dark, scary portal to hell in the basement? Interesting how Zak is now talking about portals while Nick’s show is all about searching for portals to the other side.

Of course none of that makes this story true. This entire episode looks and feels phony.

Hmm, just did a quick search on Sallie House and what do we find? Books, tours and audio CDs for sale. Clearly it’s in their best interest to keep the haunted stories going otherwise the revenue stream dries up. These guys are making money on a house they lived in 20 years ago? How very interesting. Judge for yourself, type in Sallie House in Google and go the first link. Tell me what you see. If you’re making a living off claiming your house is haunted, I find that a bit dubious, but that’s just me.