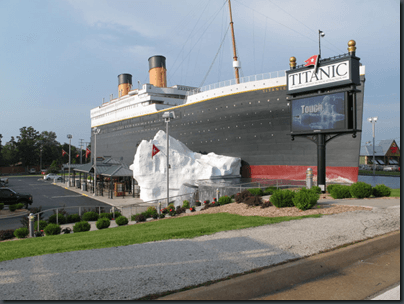 Continuing their adventures in Missouri, Zak, Aaron, Billy and Jay investigate the Titanic Museum in Branson. It hosts 400 artifacts from the Titanic, from life jackets to a Bible. Visitors claim to see apparitions and hear voices.

To start, they speak with Jamie who claims she sees John Jacob Astor on the grand staircase. She says it’s John, not because of evidence, but because there is a replica of his bedroom at the top of the stairs. Zak speaks with another guide, Alexis, and while doing so, phantom hand prints appear on the glass. No one could have missed a spot, or inadvertently rested their hand, it’s the prints of a child lost on the Titanic.

Finally, Rob shows off a Bible from Reverend Bateman, which he gave to his his sister-in-law, to give to his wife as he knew he wouldn’t make it off the ship.

Since Zak offered toys to the child spirits, he goes to a toy museum, not a toy store, to buy toys. This leads to an idiotic segment of Zak not being able to buy rare toys. Since the children are denied, they cause the store train to derail. Despite the paranormal angle, that incident was caused by the oddly placed dinosaur in the car getting caught up in the bar attaching the rail to the ceiling.

As they finally get to the investigation, Zak is on the hunt for phantom hand prints. Billy and Jay try to make contact with the musicians in the gallery.

Zak points the SLS at the windows on the promenade and it’s no surprise he gets a stick figure. Upon investigation, despite repeatedly saying they cleaned the windows (which don’t look clean at all), there is a hand print, complete with swirls and ridges on the finger. Who knew that phantom prints would look just like mortal prints?

Since the child is on the move, Billy and Aaron put out cookies. When they turn on the Ovilus, they get “female”. When asked how old she is, they get “six”. This is followed by “eat” which refers to the candy. Then the child gets a more robust vocabulary and uses the word, “descend”, which Billy says is to the bottom of the ocean. Nothing dramatic about that is there?

Moving to another area, Zak and Jay hear something vibrating, which turns out to be a loose sheet of glass with the words, “Iceberg, right ahead.” They naturally take this as a sign and that they were drawn there.

At the same time, Zak claims to see a child dart across the room wearing a life vest. What are the odds that Zak is standing in front of the child memorial when he makes this claim? Since he would have seen it in the daylight, it’s amazing he would make it back there at night. And as they turn on the spirit box, a high pitched blip is said to be a child voice saying “peek-a-boo.”

While Billy and Aaron set up in another area, they get “kid” on the Talking EVP Device, followed by the word “sister”. This lets them draw the conclusion that the blob they see on their imager is a child poking it’s head around the corner, looking for it’s sister.

With these pieces of evidence, captured from reflective surfaces, Zak firmly believes that the artifacts are drawing the children back from their watery graves.

Of course, there’s nothing wrong with saying your Titanic attraction is haunted to bring a touch more revenue.