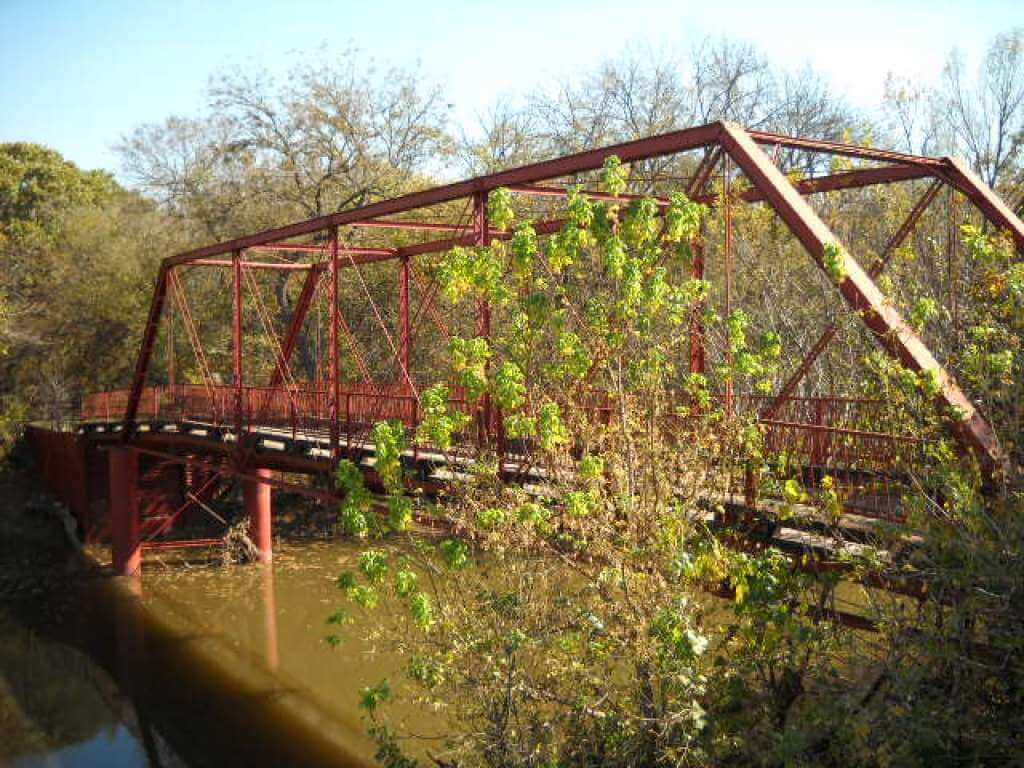 The adventure continues as Zak heads to the next location, Denton, Texas which is on the line of the Pentagram of Blood. It’s supposedly a pentagram that can be drawn across the country that goes through locations where scenes of violence like the JFK assassination and the Waco massacre took place.

Denton is the location of the Goatman’s Bridge, a location where Satanists have tried to conjure up a goat man or satyr. The bridge was built in 1884 and legend says that a goat herder was strung up on the bridge by the notorious KKK. However, the body of the man somehow disappeared from the noose before the Klan could confirm his death. They next went to his home, set it on fire and killed his family.

Zak then talks with a couple of people who claim to have had experiences on the bridge. Belinda, says that while on the bridge, she felt a presence and took a picture of what she and Zak feel is a cloaked figured. She also says she had three scratch marks on her arm – a mockery of the trinity according to Zak.

Becky, claims that she saw a figure of a man with a goat head and human body running through the thicket while she was out on the bridge for a paranormal investigation.

Phoebe, claims she got three long scratches on her back. From there, she says she wasn’t in control of her emotions or herself. She felt violent and wanted to attack the people around her. And not just attack, but actually kill them. Even her son claims she wasn’t acting like herself, although we don’t get much insight into what her odd behavior was.

Right after talking with these women, he notices that Ashley, the still photographer and someone who has been affected by events on the show in the past, appears as though she isn’t herself. She is brought to tears by something and eventually admits that she too is feeling anxiety and has violent thoughts.

As they get set for the investigation, Ashley wants to confront her fears and heads back out into the woods. Meanwhile, for reasons I’m not sure I understand, Billy takes to the water in a small boat to scan for signs of the Goat Man. If all the action is on the bridge, it seems odd for Billy to leave the area, especially when judging by his inexperience with boats and nearly falling out, being on the water at night is not his best course of action. Ultimately his part of the investigation leads to nothing but the discovery of mosquitos.

Ashley, however, is having a pretty rough time with things. She is incredibly nervous and seems more fearful of the snakes and spiders than any sort of demonic activity. There are lots of noises in the trees, then strangely, Ashley takes a bit of a tumble. It’s revealed that she was struck on the head and knocked over. It was also at this time that she heard a growl. Also during this sequence, there is the sound of a gunshot, although a gunshot in the middle of the night in the backwoods of Texas really doesn’t seem that out of the ordinary.

Things then start to take a bizarre turn. Out of nowhere, Jay says he wants to conjure up some spirits to help banish the evil of the bridge. He’s found an ancient text and wants to use those powers. Oddly, when other people do this sort of thing, Zak calls it demonic or Satanic. This is in no way hypocritical.

But they forge ahead and soon we see Jay creating a circle, mixing some ingredients and reciting some incantations. Tensions begin to mount and there is division in the group. Aaron and Billy who were not for this plan, want to leave the area. Strangely, so does Zak. They are all ready to leave Jay, who is still inside the protective circle. With everyone feeling strained, Aaron begins to head back, but his progress is stopped when he claims to be attacked by some unseen force and thrown violently to the ground. Zak claims Aaron was thrown 20 feet based on where his flashlight is left sitting and where they find him laying.

Jay says he saw something behind Aaron, who is now a bit on the delirious side. He’s staggering, fairly incoherent and is ready to defend himself against anyone who comes near him. But, he does have some injuries to his arm. They aren’t as severe as Aaron thinks, but much more than a simple scratch, so he clearly hit the ground with some force. Then again, who’s to say he didn’t trip on a rock and take a massive tumble in the dark?Yet, there is still more craziness. In a bizarre act, Zak begins to choke himself. He literally wraps his hands around his own throat all the while saying it’s hard to breathe and something has control of him. Jay tries to intervene and pulls Zak’s hands away and a tussle ensues. Zak is ready to fight with Jay and only let’s go of himself to attack Jay. He then seems to regain control and storms off, heading right for Aaron who says he basically just came out of a stupor to see Zak heading right for him.

And after all of that, we learn that Ashley decided to take leave from the show because of her traumatic experience associated with this episode.