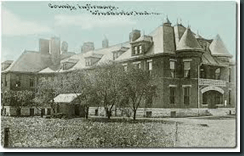 To kick off this adventure, Nick and Kristina take up temporary residence in the Randolph County Infirmary, a hospital and shelter that took care of the poor and mentally ill. It’s roots date back to 1852, but unlike so many other facilities of the time, we don’t have endless stories about cruel treatment, beatings, murder, suicide and terrible experiments. Instead, we simply have an old facility where hundreds of people lived. The facility wasn’t without tragedy however, as there are some 200 deaths and many nameless graves on the property.

The building is now in the hands of private owners who plan to renovate it. However, they claim to have what appears to be residual hauntings such as doors closings, handles jiggling, shuffling feet and a woman singing.

Nick and Kristina bring in a brother and sister who lived at the infirmary. They go on a guided tour, talk about some of the patients they spent time with and show off the basement cells. That seems a little odd, but it was for unruly patients.

The pair tell about seeing shadow figures on multiple occasions and how they felt an energy. They don’t report any mistreatment which is always a good sign.

They start things off with the Geobox, Nick feels someone is walking along with them and feels they’re being followed. Since Bill liked checkers they try to use it to make contact. They also try to connect with Doris and get the words, "Responding to you", "I’m right" and Katrina’s name, twice.

With night setting, Nick brings out another device, the Jacob’s Ladder to try and stimulate the atmosphere to help make contact. He spends the night in the cells while Katrina heads to the basement. They both gets some knocking sounds, while Nick says he hears a woman.

For night 2, a familiar face appears. Grant Wilson has agreed to hang out for awhile and lend a hand. He monitors and listens for sounds while Nick and Kristina look around. They get plenty of knocks and banging.

During the night, Nick got a loud bang while Katrina says she feels a lot of sorrow and heartache in the place. As they talk over how they slept, they get the word, "Hello" from the recorder.

As he states in the beginning, Nick feels there is a lot residual energy, but adds that there also appears to be an intelligent spirit in the infirmary. He’s not sure who it is, but he feels they got answers to their questions.

Randolph County Infirmary is certainly interesting and a fabulous looking building, but does it really contain energy? Yes, there were lots of bangs and noises, but that is not an exclusive paranormal occurrence. I still can’t say I hear actual words coming out of that Geobox. Nick says he heard Katrina twice, but I can make it out. To me, it just gives off random noise the entire time.

But again, we don’t see the aforementioned shadow figures and while Katrina may feel things, that’s not quite evidence. It’s a neat building and hopefully it helped a lot of people, but calling it haunted or even saying it has residual energy is overreaching. Again, just because an old building makes a banging noise, doesn’t mean it’s haunted.