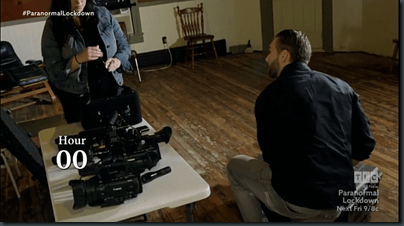 The next lockdown takes places in Malvern, Iowa at the boarded up and abandoned Malvern Manor, built by a Captain Cullers in the 1870s. He set it up as a hotel for his sailing crowd. After his use it was turned into a mental facility and continued that way until it’s closure in 2005. Josh Heard has now taken over ownership and gives Nick and Kristina a tour and explains what has been taking place.

People claim to see apparitions and hear screams. There is the story of Inez, a little girl that was found dead in her closet, strangled by her own jump rope. They see the remnants of fire damage that claimed at least one life. And finally, there is the story of Gracie, a mental patient that tugs at people. Of course it would be nice if they could prove any of these stories were tree and not the standard urban legends that surround a place like this.

To start Day 1, Nick brings in Johnny Houser who claims a dark shadow figure rushed at during an investigation. However, they don’t get that same sort of reaction on his return visit. The first day proves to be rather quiet, so Katrina will sleep in the hall where the shadow was seen and Nick will sleep in Gracie’s room.

Day 2 starts with an analysis of the recorder that Nick had running and it appears to have loud bursts, sounds and disturbances going off all through the night. In the noise, Nick hears, "Nick get up" and some violent screams.

As an experiment, Nick set up Infrasound devices to see if they can pick up the voices again, but things seem quiet during the day.

They next try to find Inez with the 3D mapping software. Rob says he can hear scraping on the wall and reproduces the sound on the paneling. Nick becomes extremely excited as he walks through a static field. He feels this is making direct contact with someone.

For the end of the day, Katrina will sleep in the parlor under the picture of the captain and Nick will take the hallway. As another experiment, the Geobox is left running upstairs.

During the night, the Geobox recorded words referencing Johnny and his return. It also mentions Inez and that there was a witness. Nick decides to bring Johnny back to the house to confront the shadow figure, but it doesn’t make an appearance. However, he gets a lot of goosebumps and his microphone falls out of his shirt. These are both taken as signs of the paranormal.

As they get ready with the 3D mapping software, a large figure appears and then disappears next to Nick. They also get the words, "Johnny is here" and "nice to meet you" on the device. Johnny explores the hall and says that room 7 is filled with sadness.

Katrina and Nick feel Inez was trying to be heard, but was kept quiet by the captain. That really doesn’t make any sense, but that’s their interpretation.

If we are to go by the audio devices, then there are plenty of voices calling out in the night. If we look to other evidence and hold off judgment on these somewhat dubious stories, then all seems pretty uneventful.