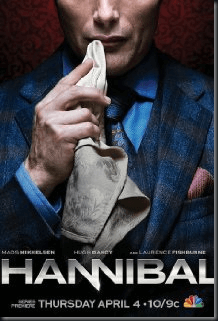 NBC is staying the course and each episode of Hannibal is darker than the last. The visuals are especially taking on a darker and more grisly tone. This last episode of the exposed vocal chords of a human instrument drives that point home. And the intestines drying in the sinks. The jars of who knows what down in the cellar.

It’s interesting to see NBC keeping with the dark atmosphere of the show and not shying away from some of the shocking imagery (especially after episode 4 seemed to rub people the wrong way). This is after all the story of a serial killer. I don’t know how long they will keep this up or if it will alienate the viewing public. People are easily offended these days and since this is broadcast TV they are taking a pretty big risk. I checked and Hannibal hasn’t been renewed for a second season yet.

I’m not sure where we’re headed with this story, but I’m quite willing to play along. I feel we’re still at the stage of defining characters and their relationship with each other. Even within the story, Hannibal is "considering" having Will as a friend. It’s an unusual thing to hear someone say they have to consider making someone their friend. Unfortunately, this slow pace is why shows get cancelled. They don’t get a chance to build and create depth any more.

We’ve now seen Hannibal commit two murders and we know he’s done several others. What is the motive? What drives him? Is it quite literally a hunger? That seems too simple and shallow for this type of character. Is he experimenting? Like Tobias, is he just trying to see how far he can go before he gets caught? Is it the game of staying ahead of the police that he wants to play? Is he trying to see how far he can push Will before he breaks? We know he has tragic events in his past, how do those fit in. Was he responsible?

With Dexter, we know he’s a serial killer, but that’s not what he wants to be. He channels the Dark Passenger into something "good" and tries to be normal in other aspects. This makes him likable and we accept people being brought to justice. We’re willing to overlook this slight character flaw…

Hannibal is a serial killer and blends in to society with his psychiatric practice (which is just a way to find victims by the look of it), his dinners (a vicarious thrill to know what everyone is eating and thus make them a part of the crime) and high society cultural events. So is he with the high elite because they are so boring and daft they’ll never catch on to who he is? Does he regret the way he is? Does he embrace it? Is there something greater that Hannibal wants from life? The sympathetic part hasn’t come out yet. Will it? Can Hannibal be likable or will this turn to cat and mouse and we watch Hannibal do his best to keep the police at bay until the ultimately fails?

I had hoped for more an interaction between Hannibal and Tobias. There is so much we could have learned about Hannibal. He was certainly forthcoming who he was, but did he want to be friends with Tobias up to the point where Tobias revealed he’d seen Hannibal out on the lonely road doing what he does so well? Since Hannibal didn’t have the upper hand did he have to get rid of Tobias? Is Hannibal a teacher perhaps? Can he give shelter and guidance to others like him?

I guess that is where we go from here, to learn about Hannibal and how he views people. He seems quite taken with Will and how Will can assume his point of view, which is then followed up with Will can see the point of view of a psychopath.

I’m intrigued by this show and when the tipping point will come. There is so much to explain and reveal. When does the house of cards come tumbling down? When does the mask of Hannibal come off?

Were to go from here, that is indeed the question. 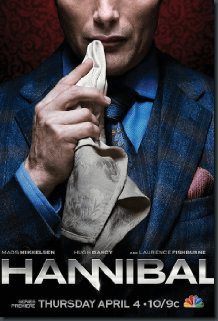