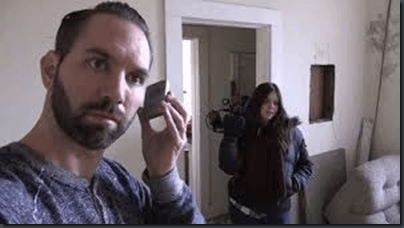 We’re off to the Anderson Hotel, which might be a real hotel one day, once they scrape off the remnants of being a flop house. It doesn’t look like it, but the place is undergoing repair and renovation, but apparently that has stirred up some trouble. There are reports of figures, shadows and even assaults taking place. One tour guide says he was attacked on the foot.

The term "flop house" doesn’t conjure happy images, and sadly, this place lives up to that name. It is said that a man hung himself in the closet of one of the rooms, that a 19 year old girl committed suicide and a man let a fire consume him rather than get to safe ground.

Nick and Katrina start the ball rolling by getting some background and a feel for the place. They visit the room where the 19 year old took her life and the original mattress is still on the bed and it looks hideous. They visit the room where the man hung himself, complete with broken furniture and empty liquor bottles, and the location where a figure has been seen in the window, which they are referring to as the burning man.

They also visit with the bakery next door and hear from the owner that she has experienced activity as well, basically since the renovation started. She has felt a presence, especially when she brought down doors from upstairs.

For this investigation they have brought back the Geobox and added a brain monitoring system to show activity while they sleep. Nick wants to use this while he lies down on the bed where the young girl died. He says he feels something is lying with him. He says he has visions of sadness. The recorder he left running picks up what he says are footsteps, screaming and the words, "get out".

As the night draws to a close, Katrina is not so bold as to sleep on the bed itself, but chooses to put her cot next to it. Nick takes the hallways and hears shuffling as though someone is wandering around.

The next morning they put the Geobox in the room where the man hung himself. They get the words, "Don’t touch me". although it doesn’t seem like Katrina is hearing the same thing as she barely reacts to this new device. To be honest, I’m not hearing much out of it either. Nick is repeating what it says although I can’t make out where he is getting the words from.

In the room of the burning man, they hear "get out" and Rob, the camera man, feels a stabbing pain in his side. After putting down the camera, they say he has been bitten as they see teeth marks. That is enough for Rob and he takes the night off. Of course, he’s never done this sort of thing before so that makes it all the more dramatic.

When they gather back again, Katrina and Nick light some sage and go from room to room to push the spirit out of the hotel. Rob has come back, but says his camera battery has died as all this is going on. They again hear shuffling sounds. From the Geobox, Nick says he hears, "you’re fucking killing me" as they whisk the sage around, which is then followed up with "warning guys", "understand", "here I am now", and "you stay right there". These appear to be said out of anger as the sage goes room to room.

Determined, they keep going, eventually open a window and "release" the spirit energy. They believe the air has been cleared so to speak and the heaviness of the oppression seems to be gone.

It’s interesting that both Zak and Nick are using the idea of sensory deprivation as evidence of the paranormal. Zak feels plunging into total darkness gets more activity while Nick feels depriving himself of sleep is the way to go. Neither of these are reliable and give false positives.

But anyway, some interesting stories about this place, but I’m not sure that Geobox is valid. Nick seems to be the only one hearing anything. It’s also hard to put stock in "shuffling" noises in a building loaded down with that much crap. And who isn’t going to feel weirded out and have sympathy and experiences when they lie down on a filthy mattress where a woman supposedly killed herself?