A virus has ravaged the country turning normal people into flesh eating zombies (I hate it when that happens). Our story is told through the eyes of Columbus who gives us all we need to know about fending off the zombie horde and avoiding danger. He is soon joined by Tallahassee who always knew he would be good at something, but didn’t know it would be zombie killing. In their desperate search for Twinkies they meet up with Wichita and Little Rock a couple of con-women who soon steal their car and their guns. Either one is enough of an insult, but both? Dirty pool ladies!

Not to be stopped, because stealing a man’s Caddie will not go unchallenged, Tallahassee and Columbus get themselves another vehicle, more guns and by coincidence meet up with Wichita and Little Rock whose car is abandoned in the middle of the road. Once again, they are ambushed by these tricky girls and their plans change to head out to California where Pacific Playland is supposed to be zombie free. After much debate at gunpoint the crew agrees they should stick together so off to California they go. (The discussions they have while driving are hilarious!)

Of course Pacific Playland is not the paradise they hoped (who would have thought?) and yes, it gets overrun with zombies and one hell of a shoot-out ensues where the body count rises like an old Sylvester Stallone flick.

This is one of the most expensive B-movies I’ve seen and I enjoyed it thoroughly. There are plenty of one-liners, ridiculous situations, lots of zombies getting bashed in the head and tons of headshots with sawed off shotguns. While the movie isn’t gory per-se, there is a lot of “bursting” and “splattering” if you get my meaning. Lots of things hit the ground, hard. And lots of things get hit in the head, hard. It’s a mixture of Evil Dead, Shaun of the Dead and How to Survive a Zombie Attack.

Woody Harrelson is just great as Tallahassee and this is the type of role he should be playing. His crazy antics and outbursts work so well for him. You really wish you could just give him a Twinkie.

No awards will handed out for this film, but it’s still fun as hell to watch. You’ll laugh, you’ll cringe, you’ll yell “Booyah!” Seriously, who doesn’t want to ride a roller coaster with a machine gun in their hand?!

artrojasdesign says go see this one.

And that f-ing clown deserved what he got!

Tallahassee – A tribute to Zombieland

I’ve added a new character to the Flaming Pumpkins picture gallery! Oh yes, one a weekend from now until Halloween!

It seems only fitting to make a flaming pumpkin tribute to that most noble of Zombie Hunters – Tallahassee. With some help from Zombiepumpkins I was able to carve this figure in just a few minutes. I was originally going to go with another pattern but this one was too good and timely to pass up. I have to say he looks cool as hell and he let out some wicked flames.

Click on the picture to check out the full gallery!

Kids vs. Zombies – Free in the App Store

Fight zombies in the dark!

Kids Vs. Zombies is a very addictive game.
— appVersity.com

You control 3 kids attempting to survive an army of undead monsters. To defend your fort, you must effectively use their unique abilities:

Every level begins as dusk fades to the pitch black of night, making it difficult to know where the attackers will come from next! Survive the night and you will be rewarded with a trip to the Hardware Store to upgrade your weapons and defenses, in preparation for the next assault.

Each night offers more challenges, zombies and surprises. Survive as long as you can!

– 45+ Levels
– 3 characters with unique abilities – use them together to survive
– Over 10 different zombie types
– Boss fights!
– 3D Gameplay – Tilt your iPhone/iPod to adjust the view
– Store containing 12 unique items to upgrade
– 4 difficulty levels — “Nightmare” will have you begging for mercy!
– Auto-save anywhere for easy on-the-go gaming

Lots of Pumpkins – A Halloween theme for WordPress

So many to choose from where do you begin? Here we have lots of pumpkins just waiting to fulfill their ultimate Halloween destiny. Will they become a pie? Perhaps they’ll get face paint? Or will they sit on the porch and keep a watchful eye on your tricky neighbors? This orange highlighted theme will surely dress up your blog. Nothing too dramatic, just a nice look with fun pumpkins and plenty of space to write in. 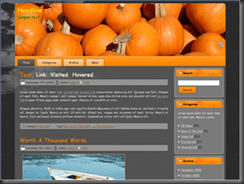