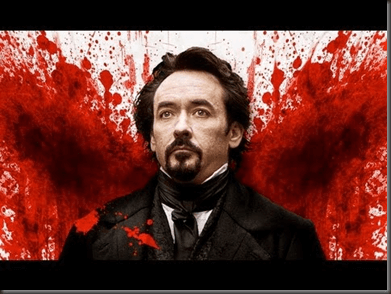 Since I’m a fan of Cusack and Poe, I had every intention of seeing this movie when it came out in theaters last April. I went to "Abraham Lincoln" and thought this movie would make a great "double header" so to speak. But for some reason, the idea simply slipped out of my head. Before I knew it, the movie had come and gone. And when I asked if anyone had seen it, no one knew what I was talking about. It’s disappointing, because overall, I found myself liking this movie.

The plot is a bit ridiculous, as a murderer bases his crimes on the works of Poe. But this isn’t the first time a movie has been made with this premise. I seem to recall some other low budget horror movie using the same concept. See, it’s not so outrageous.

We find Poe in a rather beleaguered state. He’s on the verge of intoxication or in need of "fortitude", he’s nearly broke since he can’t get any of his reviews published and he doesn’t have another "Tell Tale Heart" in him. As the editor says, "write me something that sells." He’s also at odds with his beloved’s father who thinks he’s nothing but a drunk, opium addict and atheist. Needless to say, Edgar is down on his luck.

And then he finds himself at the center of a series of murders based on the his macabre short stories. But emulating Poe isn’t enough, the killer captures Emily and forces Poe to try and figure out who’s behind the crimes. At his subsequent murder scenes he leaves clues as to his identity and the whereabouts of Emily. The murder also forces Poe to write about the murders, blending fact with fiction so they can be told in the following day’s newspaper column. He wants Poe and himself immortalized in the press.

Are you with me so far?

I found the atmosphere, costumes and quirky nature of Cusack as Poe to be very enjoyable. I love period piece movies, and unlike some, I’m not going to throw a fit because a movie oversteps a few historical details. It claims to be a work of fiction, not a documentary, so getting a few details wrong to push the story along is alright with me. If you put a Ford Mustang on the grounds of Downton Abbey, we have an issue. If you get the wrong color of paint on a building, I don’t care.

This is a slow paced movie that makes multiple leaps to keep the story going. Not everything falls in line from one scene to the next, and the action is just as much focused on Poe writing his account of the murders as the acts himself. In same cases it almost seems like he’s relishing his new muse. He’s inspired to write. The story flows. The ideas leap to the page. He’s once again back in the limelight.

The two things I really liked is that Detective Field isn’t your usual bumbling idiot of a cop so many of these use these days. He’s smart, focused, clever and determined without being an asshole. He has skill and knowledge.

We also have Emily who won’t play the victim. She tries to escape. Uses her wits. Doesn’t give to hysterics and keeps a level head. Also, a nice change of pace from what we normally see of female lead in these kinds of films.

It seems like most people gave this movie a pass. Sadly, I was one of them. But now that it’s available again, I’ve made amends. The story is a little thin, but the atmosphere and acting help to smooth that over. It’s not the type of movie to have you jumping in your seat or scratching your head over the complexities of the killer motives. In fact, when all is said there still won’t be feelings of enlightenment. But as they say, the point of a journey is not to arrive.

Between this and 1408, you might have the makings of a fine night of the macabre with John Cusack.

I know I’m really late to this party, but I finally decided to jump on the bandwagon and see what this True Blood show was all about. It’s pretty good, but not quite what I expected. Actually, the last vampire show I watched was Moonlight and I thought that was pretty interesting. That show had quite a bit of potential, too bad they killed it.

Anyway, I like the location and the characters (Lafayette always cracks me up) but the story is pretty standard fair isn’t it? At least so far. I’m sure there’s more to this murder mystery, that would just be too damned simple.

I guess you have to expect a slow build with a new series, you have to introduce everyone and go through the long process of giving the back-story riddled with issues and problems. And you have to know who’s sleeping with whom. And I have to admit, I’m a little surprised at the volume of sex in this little tale. I’m not being prudish or shocked by it, quite frankly I think most of it is embarrassingly funny, just strikes me that the only one keeping it in his pants is vampire Bill.

Although I think that’s about to change.

One thing I do like is how each episode picks right back up where it left off. They don’t skip over huge gaps of time and leave you wondering what happened.

I’m certainly going to finish out this season then jump into Season 2. I’m sure things are going to pick up nicely as we move along. I’m sure this will hold me over until September when a whole slew of shows return for new seasons.

True Blood fans, is it worth the ride?

Another movie that’s really good until it hits the halfway point. Then they have that pesky problem of trying to explain what’s happening and why, and then the whole movie goes to crap.

Kiefer Sutherland plays Ben Carson, a former police detective (aren’t they always) who’s dodgy past has landed him as the security guard for an abandoned mall. But not just any mall, a mall with a checkered past where a fire swept through killing dozens of people. And within this mall of the damned (not to be confused with the Mall of America) evil sprits lurk within the old mirrors and they have taken a liking to Ben and his family. And by liking I mean they are out to get him and his family and cause some wicked self-destruction and mutilation.

As I said, it’s all working until they try to explain why there are evil spirits in the mirrors and why the fire started and why that security guard took a glass shard to the jugular in the opening scenes. But it just doesn’t make sense. Are the spirits seeking vengeance or asking for help? Was the fire an accident or was there a cover-up? Is this is a mall or an insane asylum? And what the hell do we need the Nun for?

To hell with the plot let’s just have a CGI orgasm and throw everything we can onto the screen and hope the audience buys into it. By the time the end comes around you just don’t care anymore. Who cares why any of this is happening, just get me off this buggy.

Lots of potential and some pretty impressive initial effects but overall this really goes nowhere.

This absorbing A&E program profiles three families who are certain that specters and other strange phenomena inhabit their homes. From a Midwest clan that enlists a ghostbuster to a Pennsylvania family followed by spirits to 11 different houses, these stories could turn doubting Thomases into believers. On the other hand, skeptics may prefer to accept the logical explanations of historians, psychologists and a prize-winning physicist.

The tales of the paranormal really aren’t all that intriguing and for the most part it’s nothing more than odd sounds and bumps in the night. I suppose a ghostly stalker that follows you to each house you move to is kind of interesting. However, some of the evidence and claims border on the absurd. I forget his name but the debunker now turned investigator, who is apparently now a sensitive had me laughing. His talking about ectoplasm seems ridiculous and made the whole idea of paranormal investigation seem cheesy and foolish. As soon as he made his comment about it all I could think of was “He slimed me!” from the Ghostbusters movie.

I’ve seen the footage before but the last story with the fellow who has a cabin in the woods and all the unusual things that show up when he takes pictures of his kids had me shaking my head. I do a lot of photography and everything present in his pictures looks like dust, bugs, a dirty lens and just plain streaks of light that do odd things on a long exposure. Even his video footage looks like nothing more than lightning bugs flying around.

Apart from the stories is the amusing commentary from the believers and the skeptics. I have to say, both sides throw out some real whoppers as to explanations. I can believe they say some of these things with a straight face, it’s so far fetched.

But anyway, don’t expect much here. You won’t be on the edge of your seat with anticipation and excitement. More likely you will be laughing and shaking your head like I was.