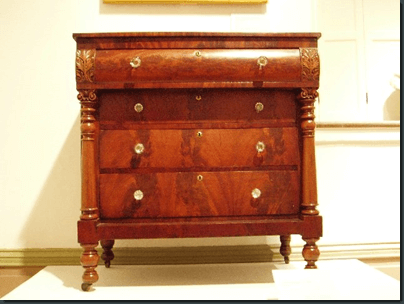 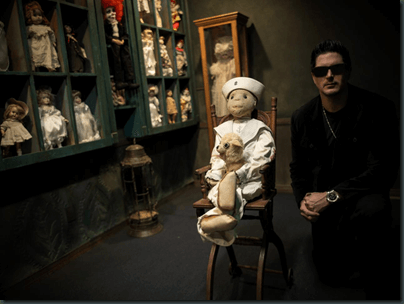 Since we’re in a slight lull from Ghost Adventures, let’s have a look at the other project Zak has been working on. As you may have seen from newspaper articles, Zak has been collecting odd trinkets from the world of the paranormal, much like Ed and Lorraine Warren and their nephew John Zaffis. He’s been able to procure a cauldron supposedly used by Ed Gein and the VW Bus used by Dr. Kevorkian. After amassing a collection of oddities, he’s opened his museum of the bizarre to the public.

Along with the items he’s personally collected, he’s open to others bringing in their treasures, much like a demonic Antiques Roadshow. To that end, the first item up for inspection is the Dibbuk Box. This box was actually featured on Haunted History back in 2013, or at least that’s when I saw it. This is the same Dibbuk box that was purchased by Kevin and subsequently sold on eBay. Jason now owns the box, but he’s had problems with it. Problems he solved by locking it in another vessel and burying it in the ground.

Until now. Jason and Kevin have unearthed the relic and brought it to Zak. He decides to put the box in his "isolation chamber" and has Kevin hang out with it. What does Kevin do? Why open it of course. He then starts mumbling what sounds like a Poe poem (although I have no idea what it is). Zak thinks he’s speaking in tongues, or is possessed, or something equally bad. We can’t really see too much because there is an old style lamp right in the way of Kevin’s face the entire time. However, he does say there is something lurking down there with him.

They take it to a Rabbi, who surprisingly doesn’t seem all that concerned about it, but, Kevin breaks into a coughing fit and sweats like he’s been doing some serious manual labor. Remember, he opened the Dibbuk Box, so clearly he must exhibit some sort of side effect.

What happened to the Dibbuk Box? What did they ultimately do with it?

The other part of the show involves Robert the Doll, perhaps the inspiration for Chucky. It’s a very old toy, owned by a boy named Robert who identified with the doll to the point of calling it Robert and he went by his middle name, Eugene.

Eugene had the doll for decades and continued to both play with and speak to the doll his entire life. Or so the legend goes. It’s now in the possession of East Martello Museum and his caretaker, Cori Convertito.

There is an odd past for Robert, to the point that he is so dangerous and so mischievous and so prone to causing terror that the only recourse is put him on display. You just have to be respectful. Ask permission before you take his picture and don’t make any disparaging comments or lest the curse take hold.

Such is the plight of Bonnie Randolph who comes to beg Robert for forgiveness because she took his picture without permission. Also, while looking at the exhibit, someone else made a derogatory comment about Robert, but she somehow took the brunt of his anger. I’m not sure why she takes responsibility or why evil got dumped in her lap, but there it is.

But wait, before we get to that. As the doll is displayed for Zak, his man-troll Theodore comes in and exclaims in surprise at the visage of Robert. Clearly there is nothing staged about this scene and Zak springs into action. He tells Theodore he needs to apologize to Robert or else they’ll probably find him dead on the steps. (I added that last bit, it’s not in the show)

Bonnie Randolph who believes in the power of the evil eye from Robert, offers her apologies like begging for forgiveness from a Mafia Don. She is brought to tears while explaining Robert is responsible for her terrible driving that involved her in 3 accidents and that she’s not clumsy, it was Robert that pushed her down the stairs causing all sorts of medical problems. All because she took his photograph without asking, even though he was out on display for all to see, and someone else made smartass comments about him.

Let’s be realistic here. If this doll is so capable of evil, and quite frankly, Cori believes it to be true by the way she talks and handles Robert, why isn’t Robert locked in a vault, hidden deep within the earth where he can’t see anyone and no one can make the terrible mistake of taking his picture without his permission. If he’s so bloody dangerous, why is he just sitting there like a spectacle? I’m sorry, but the whole thing is just shockingly foolish.

But if a doll really could control traffic, could I have a go with it please? I could use it to move the other cars out of the way and cut my work commute time in half.

Also, does anyone else note the contradiction in Zak asking to take a picture with the doll after they’ve already been filming it?

I don’t believe either of these items are meant to be part of Zak’s collection, I believe they just wanted to brave unleashing pure evil and truck it across the country for a spot on his show. Nothing harmful in that right?

Quick update. The “chanting”, “mumbling” or “speaking in tongues” you hear from Kevin in this episode is him reciting lines from a poem called “Shadowman” he wrote back in 2012. It has nothing to do with him somehow being possessed by the contents of the box. Taken at face value, it’s a little bit of theater, a flair for the dramatic and perhaps just a hint of being staged. If you listen to the link, you’ll notice Kevin’s voice sounds the same in the recording as it does in the show, so clearly he’s “not out of it”, or “not himself”. It’s a pretty decent reading actually, but it’s obviously bogus evidence.