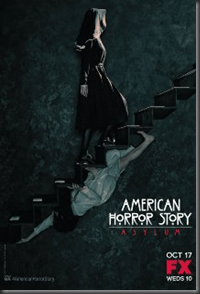 Speaking of American Horror Story, it’s back and it’s every bit as strange and bizarre as you would expect. For this story, we’re at Briarcliff Manor, which like so many of the "institutions" we’ve seen on shows like Ghost Hunters and Ghost Adventures, has a checkered past and high body count. At one time it was a tuberculosis ward complete with body chute and a death toll of 46,000. Then it was converted by the Catholic Church into a Sanitarium for the criminally insane where it was hoped a pious life could rid them of their demons. It house "Bloody Face" a notorious serial killer who’s fate is unknown. Finally, it has been shut down and abandoned. In essence, everything we’ve heard about institutions for the mentally ill has been rolled up into one place. And what a place it is!

Jessica Lange returns as Sister Jude, the matron who runs the asylum with an iron fist and a closet full of caning rods.

More of the old cast will be forthcoming as this story unravels.

The story moves quickly and we get a barrage of characters and twists right off the bat. Sister Jude will stop at nothing to heal the mentally ill of their sins even if that means holding a reporter against her will and threatening to expose her "partner" if she doesn’t have her committed to the sister’s care.

And we have the makings of a mad doctor, who plans to experiment on his patients to find out what makes them tick. Can he cure evil through science? Can he "tap" into that evil and make it go away? Several patients without families have already gone missing since the doctor showed up, their bodies cremated before Sister Jude can look into the matter. Are their bodies as broken as their minds and they simply passed on or did they not survive the experiments? He’s been approved by the Church, so what could possibly go wrong?

The battle of wills between Sister Jude and Dr. Arden has begun and I have a feeling it will be one hell of a showdown.

But let’s not forget the present, where Teresa and Leo have snuck into the abandoned asylum as an end to their "haunted honeymoon tour" for some sexual thrills. But things go horribly wrong and the mood is ruined when Leo becomes the victim of something unforeseen as they explore the asylum just before sunset.

We’re in for a dark and sinister ride. We’ve already got sadistic nuns, serial killers, mad scientists, the criminally insane, forbidden experiments, the evil that men do and it all takes place in an asylum! And that’s just in the first episode!

I can’t wait to see the rest of this series. I loved the first one and this promises to be even more intense. The location is dramatic, the atmosphere is dark and gloomy, Sister Jude makes me cringe and Dr. Arden looks to be one evil man. This has everything I like!

Things have really gotten weird. Constance (Jessica Lange) is awesome as the crazy wannabe movie starlet neighbor who has a penchant for young men and makes cakes with Ipecac and spit. We also see that Ben is pretty much a damn liar all way round. He’s really stepped in it with all his cheating and we know damn well and good it’s going to come back and bite him in the ass. Not much sympathy for that chap. Vivien is carrying the spawn of Satan, a la Rosemary’s Baby, and I have no doubt Constance, Moira and Tate are all in cahoots to make it happen. Obviously, this isn’t the first set of bodies they’ve had to bury either. Moira, ever the good housekeeper, will get the shovel.

I did love the groupies breaking in and trying to reenact the previous murders. Although they bungled the hell out of it, thanks to Tate who just happens to be in the right place at the right time. Authenticated murder weapons off eBay! It’s interesting that we see a flashback to yet another murder that took place in the house. There’s a whole stack of bodies in the past of this place.

But Mom kicks some ass and the strange trio comes to rescue in more ways than one. Fun is fun and Vivien is getting the hell out of there. She’s going to sell the house, but will she really be able to?

I can’t say this show is great, and the characters are still pretty lifeless, but it does have some interesting twists and turns to it. I have no doubt the body count will continue to rise.