We all know I can’t get enough of Halloween and Stardock is placating me with another cool Halloween desktop package. The RIP 2007 desktop has been on my machine since the calendar ticked over to the new month and now there is another full suite I can load. The suite just came out yesterday so I haven’t had a chance to load it on my machine, but it looks awfully festive and the icons looks nice and spooky. For right now you need to be one of the cool kids with either an ObjectDesktop or Wincustomize subscription. But I’m sure they’ll have it available on MyColors pretty soon so you can grab it even if you don’t have the full Stardock products installed.

October is the month of ghouls and goblins, and aside from trick or treating or throwing a Halloween party, you can also “dress up” your desktop for a spooky Halloween look. Today, Stardock is screaming with joy as we present the MyColors Halloween them, which is free to WinCustomize Subscribers and Object Desktop subscribers.

This theme includes a creepy visual style to change the look of Windows with spectacular animations in the start menu and “please wait” dialog, along with a gruesome desktop gadget, and a freakishly designed icon pack with 64 unique icons, and wallpapers. This is just about everything you need to transform your desktop into its own haunted place.

You can check out the new Halloween Desktop right here!

I’ve been hard at work carving and sculpting my latest creatures of the night and what a time it’s been. With the help of ZombiePumpkins.com I’ve created some pretty cool pumpkins. I have to say some of those designs are downright tricky. And it doesn’t help that I’m using one of those piece of crap pumpkin carving tools you get out of the $3.99 carving set. Make no mistake I have made amends and have ordered the pumpkin carving kit! It should be here before the end of the week so I can really throw myself into my work.

I did try using a Dremel, but the pumpkin pulp was flying fast and furious with that one. I suppose there are some good uses for it, but for right now it just makes too much of a mess.

But enough of that, I have all new pumpkin creations to show you. Tonight’s goal was to make a pumpkin totem. I started off with three pumpkins which I intended to stack on top of each other. I spent the weekend choosing the patterns and carving the pumpkins. Then came the hard part of actually getting the pumpkins to sit on top of each other. It’s actually a hell of a lot harder to do than it sounds; they have a tendency to topple over.

I did my best to level things out by squaring off the top and the bottom and then staking the pieces together using bamboo skewers. It wasn’t fabulous, but it was the best I can do. I have a degree in English not mechanical engineering.

I took my pumpkin structure to the backyard and found a suitable site for the finale. I stuffed my fuel soaked toilet paper down the center of everything and got ready to light it up.

And Holy Crap, did it go up! The flame was a slow build, but within a few seconds a huge column of fire was shooting out the top. It looked like an afterburner! The whole backyard lit up as the flames rushed out the top.

But it was to be shorted lived. The sheer heat caused the pumpkins to bend and soften and the whole structural integrity was in jeopardy. The bottom pumpkin just couldn’t support all that weight and soon it buckled, dislodging the top carving, sending it rolling down the hill. Yeah, there was literally a flaming pumpkin, rolling down the slope of my backyard. Hot pumpkins don’t roll very well and within seconds it shredded itself to pieces and blew apart.

Strangely it was the pumpkin of Jason Vorhees from Friday the 13th and his mask broke away completely. I’m not sure if that’s cool or creepy.

I did manage to put the two pumpkins back together, at least for a short time. The top pumpkin was now getting the full force of the fire blast. It wasn’t long before it was blistering and starting to collapse.

It toppled over and deflated, leaving me with just one pumpkin and a whole lot of fire.

It was somewhat short lived, but it was pretty spectacular. Before I try something like this again, I’m gonna need to do a lot more prep work. I need to level off the pumpkins and more than likely get a support beam that the pumpkins can rest against. The top pumpkin is still doomed to roast in the fiery depths, but it should keep it from rolling down the hill next time.

I got some great pictures of this little extravaganza. Check out the full gallery and let me know what you think. Plus, if you have your own Halloween gallery let me know, I love to see what other people are up to.

Also, if you want bigger versions of these images, I uploaded them to Webshots. They are 1600×1200 and can easily be used as desktop wallpaper.

Kang, hell bent on World Domination and the enslavement of all mankind shows off his warrior fierceness and proves that he is a Being not to be trifled with.

We have ignition on the 2008 Halloween festivities! My pumpkin was able fulfill its ultimate Halloween destiny last night as I took it out and lit it ablaze in spectacular Viking fashion. I simply couldn’t let Kang and the Werewolf sit idle on the kitchen table, shriveling and gathering bugs. They needed to light up the night, to instill fear and awe upon all who gazed upon them. Plus I had nothing better to do than set something on fire.

And man did it look cool! Right off the bat the flames shot up at least 4 feet and the light and heat were intense. It was a cloudy night with the moon obscured by gray clouds which just added to the mood of the whole event. The flame lit up the side of the house as I set up the camera to grab some pictures.

To try something different I put the lid back on the pumpkin to have the flames shoot through the carvings themselves. It looks really cool even though there is a real chance of being singed when putting the cap on. But with that heat the cutouts don’t last very long and pretty soon Kang had burned out his eyes and the Werewolf was coming apart. The photos with the flame coming out the front look bizarre and the flame has a unique shape to it.

I will have to come up with at least one design where the flame can come shooting out the front. This should look pretty spectacular with the flame shooting toward the camera.

Even though the flame burned for over an hour it was the first few minutes that had me nervous. As soon as I put the match to it, I heard sirens all around me in the distance.  They were in the distance then would get louder and closer then fade away again like they were looking for me. Sensing an impending interrogation and potential incarceration I began to formulate my cover story to explain why indeed I had stuffed gasoline soaked toilet paper into a pumpkin and then lit it on fire. Running through my list of plausible deniability scenarios and coming up with nothing, I decided to go with the next best tactic… running.

It seemed a little excessive to send the whole squad after me for just one pumpkin, but ultimately I realized they were involved in some other manner of important business and they had no interest in the demonic pumpkin ritual I was performing.

This test pumpkin worked out well and I’m excited to do more. I’ll probably be carving at least one a weekend with some sort of grand finale. I have this vision of some sort of pumpkin totem as my grand sacrifice. We’ll see if I can put that together.

Check out the full Halloween display! 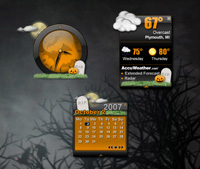 Fresh from the grave, Stardock delivers Halloween straight to your desktop. Our macabre desktop is packed full of ghoulish icons, unearthly visual styles, wicked gadgets, and a haunted wallpaper sure to send shivers through your bones.
Stardock Rest in Peace (RIP) 2007

Behold the power of Windowblinds! With the click of a button you took can have a stylish a ghoulish desktop complete with graveyards, pumpkins, bats and ghosts. It’s not just enough to add a desktop wallpaper, I need dark windows, scary icons and the whole experience. Considering I just renew my subscription to Object Desktop for the new few years, customized desktops are always in fashion with me.

If you have Windowblinds then there is plenty you can do to make your desktop more enjoyable for the holidays. Right now, I’m running the Rest In Peace (RIP) 2007 MyColors theme. It’s a nice black theme with pumpkin and web covered icons. You also get a skinned calendar, clock and weather widget. It’s a nice theme that has a really cool look to it.

Not in the mood to buy a new theme? Still not a problem as Wincustomize has plenty of excellent free ones to choose from. Here is a pretty good list to get started with.

Some of my favorites:
RIP 2007
My Halloween (Cool swampy green suite)

Check out this page for themes, wallpapers, logins and everything you need to completely redo Windows is a total Halloween theme!