What a strange coincidence…

Rolling Hills Asylum, 11001 Bethany Center Rd., will offer hour-long tours of the historical building which has been not only an asylum, but an orphanage and nursing home as well as the Genesee County Poor House in its former incarnations. Thousands of people have died on the property, which is reported to be the most haunted location in Western New York.

Here’s some more of my pumpkins that met a fiery end last night. As usual, the flames were pretty high and quite spectacular. I have to say the pumpkin was less than cooperative. I thought I had thinned the walls down sufficiently, but it was still quite difficult to cut through. The rind was a bit more fibrous than I had anticipated. It didn’t lend itself to well to my cutting technique.

In the end I think it all worked out. I like these two patterns. They were pretty straight forward and the cuts were relatively easy. Strangely, El Chupacabra bares a striking resemblance to my dog…

Anyway, here a couple more of my pumpkin cutting adventures for this Halloween season.

View the rest of the flaming pumpkin gallery

Ok, to use the term pumpkin carving is a gross understatement. This is pumpkin sculpting. These are from Ray Villafane, an artist who has found his way to using the pumpkin as a canvas. There is no doubt that his work goes way beyond simple templates and tea lights.

Have a look at these beauties, they are indeed works of art. 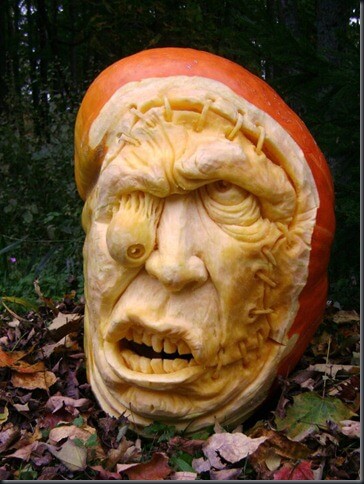 You can see more of his work on his Facebook page:

And you check out the tutorial so you can give it a try yourself: