It’s not all about Paranormal Television, sometimes you just want to go running around laying waste to Zombies and other diabolical creatures of the night. I haven’t downloaded this one yet, but as you well know, I’m a sucker for these types of games. It looks pretty interesting and for $0.99 I hardly think I’m losing out on anything. So give it a try and let me know what you think.

To the App Store!

In Ghosts’n Zombies you play as a bushy-eyebrowed, cigar-smoking, shotgun-toting monk who apparently was dispatched from the Vatican to investigate a mysterious haunted chapel. Upon your arrival, you discover the church is absolutely loaded with rats, ghosts, zombies, and other demons. So, as an agent of the Vatican, what do you decide to do? Shoot everything that crosses your path of course. 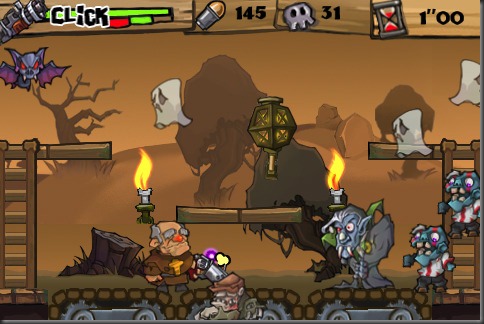 Ron and the Chicago Paranormal Detectives are called in by a former student of a women’s college to bring some closure to some of the events she felt when she attended school there. The school is scheduled to be torn down and she wants some answers about her experiences before it’s gone.

While she was a student, Danni felt and experienced some odd activity. When she was in the school after hours she felt like she was being watched. Danni also says that when she would play in the music room, she would hear a bang, go to investigate it, and find her sheet music arranged differently.

There is also the story of a young girl who died and her body was left on the front lawn of the school.

As soon as Ron and team begin their investigation they start to see shadows and see someone moving. Not to discount what these guys are doing, but it’s an abandoned building, how do they know it’s not just kids vandalizing the place or a homeless person trying to keep from getting caught? Bangs, bumps and other noises like that would be pretty common in an abandoned building.

Moriah, the medium, begins to feel a very strange presence as she’s walking around. A male begins to taunt her and make some odd comments about how she should be on the lawn – a reference to the previous victim. There is also the comment about hydrochloric acid and apple seeds. Kind of an odd combination but the connection seems to be about how the girl was murdered. She was poisoned.

Ron and team continue to see shadows and figures move around the building. They aren’t able to catch up with anything, but they’re convinced something is going on.

As they do more research they find the girl that was found on the lawn was poisoned with cyanide and the main suspect was her boyfriend. He claims she committed suicide after they broke up, but there is strong suspicion he was behind it.

So did the CPD team meet up with this murderer in the old school? It’s a really interesting story, I’m sure someone will make a movie about it, but I can’t say the evidence supports it all. The actual captured evidence doesn’t seem that strong. Again, the EVPs are pretty weak, and the thermal images aren’t too solid. They have quite a few personal experiences and the medium gets some interesting information, but when all is said and done, I don’t really feel they walked away with anything tangible. They feel there is paranormal activity, but I’m not really sure the evidence supports that.

As you would expect, Danni feels that everything they’ve found supports what she’s believed all along. It’s a wild story and certainly worth more investigation, too bad the actual location may soon be gone. But if it does get turned into housing we might be back to investigate what the new residents experience.

GHI continues with more investigations in Australia with a stop at the Port Arthur Penitentiary, a prison for British and Irish inmates. (As an aside you have to laugh at Barry and Paul’s reaction when they hear about the British and Irish ties) Apparently the paranormal activity here extends back to the 1870s. People see apparitions, have been touched, hear footsteps and have encounters on a regular basis.

When Robb, Ashley and Brandy are in the room of Reverend George they hear distinct footsteps above them. Of course there is nothing up there. Good thing it’s a calm night, no wait, it’s windy so that noise could be just about anything.

Paul is doing an investigation and the door keeps opening on him. We know it’s windy so there really isn’t much to that occurrence.

In the cell of John Gould, Brandy asks for John to come and make his presence known. She then feels something touch her and the word "Okay" later shows up on the recorder. Quick grab the thermometer! Oh wait, you left it in your other ghost hunting pants.

Again in the surgeon’s quarters, Barry hears a very loud bang. Again, it’s just the wind, but it does prove that people can hear and feel things that are nothing more than the wind. And when you already have it in your mind that a place is haunted you can really begin to believe anything.

In the same place, Barry is lying on the slab where the doctor perhaps did some unorthodox dissections. Joe says he is recording wild temperature fluctuations, but again, we don’t see the meter to confirm that. Additionally, as Barry is getting ready to leave he feels someone touch him across the shoulder blades.

Another piece of evidence is in the Commandants room where the bed curtains move suddenly. They only move once, but this could easily be a draft caused by someone opening a door in another part of the prison. A slight fabric flutter is nothing to get too excited about.

The big piece of evidence is the figure Barry caught on camera. While doing a 30 second exposure Barry captures a rather clear looking figure standing next to the building. I do agree that under normal circumstances a moving object won’t show up on an exposure that long. If anything the camera would record a blur in that area or something that might look like a haze. I’m not saying they did, but it wouldn’t be hard to artificially create a photo like this. However, it is pretty cool.

The final two pieces are the "Get Out" that is supposedly spoken as they’re talking to the inmates and the words "Payback" as Robb is talking in the surgeons quarters.

A lot of the evidence is pretty easy to debunk. We clearly know it’s windy so things moving, rattling and even the sound of footsteps could easily be attributed to that. Brandy feeling light headed when talking to John Gould can be the power of suggestion since he was convicted of doing some bad things to children. That can easily play on the mind. The temperature fluctuations weren’t actually shown to us and I always discount the EVPs now days. Those just don’t sound like anything and are too easy to recreate artificially. And shouldn’t these EVPs have accents?

The picture Barry took is really the only impressive thing they got. Personally I feel it would be very easy to recreate a picture like that, but if we go out on a limb and believe in it, it’s pretty interesting.

Robb of course says the place is haunted so I’m sure that’ll help tourism.

This seems like another one of those episodes where they’re making some huge leaps in logic and faith and coming up with some faulty conclusions based on their own prejudice. We have a family who are all claiming to have paranormal activity in the form of some little girl dressed in what could be described as an Easter dress who seems to be without eyes. There is also another more demonic figure with a terrible grin and skin that may fall off at any second. Each member of the family tells almost exactly the same story. (That alone makes me suspicious)

While researching the history we are sidetracked by a terrible story of a mother who tied her children to the bed while she was at work and then, as you might expect, the house catches on fire and the children perish. A grim story to be sure, but it’s discounted as having nothing to do with the current paranormal activity. (I have to wonder why they brought it up then)

In pops Lorraine Warren, who in typical fashion, feels doom and gloom in every room she walks into. She is saying there are problems with all aspects of the house, but says the problems center on the daughter Sarah. Let’s go interrogate her some more since everyone holds back on the first couple of interviews.

Funny thing is, the whole family, including Sarah herself admit that Sarah has been heavily involved in drugs, is a reckless and troubled teen who is lashing out because of her younger sister and stepdad. She’s feeling neglected. As you might also expect we have to work in the Satanic angle. But this time, Sarah didn’t actually practice any rituals or involve herself in anything, she was trying to be cool for a boy she liked who lived across the street and bought a Satanic Bible – online. Her involvement with the practices are no more than simply flipping through the pages. But of course in Ryan’s world that’s a Pandora’s Box and he believes it has opened a portal to the demonic. It amazes me that you can open some book related to the devil and he instantly appears, but if you open the bible, Jesus doesn’t stop by for tea.

Anyway, the team finds no evidence of the paranormal, but they do find out Sarah hasn’t been baptized. (Boy is this turning out to be the plot of a cheesy horror movie or what?) So Bob Bailey does a baptism and that is the end of that. There’s no sizzling as the Holy water touches her head, no vulgarities or spitting of pea soup. However, they do take one last shot at Sarah by ganging up on her and saying she needs to change her life. Ryan says she is being defeatist and because of that the demonic will win. That’s for being positive guys! That wasn’t condescending at all!

In the final credits we see that Sarah is going to church and to therapy. Funny how it takes some paranormal investigator to come in before this girl goes to counseling, which is pretty obviously needed. Seems to me this whole thing could have been avoided if she went to counseling at the same time she was taking drugs and trying to hook up with the Goth kid across the street. Where was the intervention at that stage?

Once again it seems like the "paranormal" is a cover for some severe emotional issues. Clearly this girl is distraught and has some abandonment and self-esteem issues. Not being able to cope with her actual problems the paranormal is brought into it. Now, the whole family shares these stories since they don’t want to deal with the real issue. Seriously, how long has this been going on for and they decide to do something about it now? Is getting rid of demonic forces easier to cope with than saying your daughter has problems?

Paranormal State is turning into Jerry Springer with each episode.