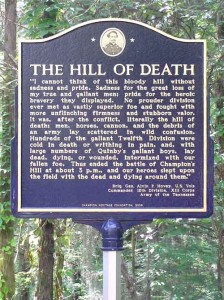 For the next installment of the Vicksburg grand tour, Zak and team visit the Champion Hill Battlefield where Grant and Pemberton squared off in 1863. Thousands of men lost their lives in savage fighting. The land is now in the hands on Sid Champion V, and Zak can feel the darkness and weeps for the land.

Zak uncovers three stories of pure evil. Al, a friend, saw a mist moving up the hill. Mike, another friend, felt something cold on his shoulder. Sid has the most frightening tale of them all and takes the crew to The Hill of Death, where evil came across as a wet blanket of emotion.

Those are the tales of evil? A mist, getting the cold shoulder and feeling some emotions? You think, “pure evil” would present itself in a guise of something a touch more sinister.

They start off the investigation by firing a Civil War cannon, which nearly makes Aaron soil his pants with excitement. From there, Bill Chappell sets up what is in essence a laser microphone. In the midst of a rain storm, Zak seems to do some “conjuring” when he commands the men to “Rise out of this ground”. They feel the beam is being broken and get the words, “I feel dead.” For once, I actually hear something in the static and it’s sounds a lot more like, “what’s up guys,” as though they tuned into a walkie talkie.

To try and cover more ground, Aaron and Billy head in one direction, while Zak and Jay head another. Zak and Jay mistakenly find Aaron and Billy on the thermal, then believe they’re being stalked by a light anomaly. The light appears and disappears as though it were flying behind the clouds. But, now that Zak has a prompt, it’s time for him to zone out like we’ve seen so many times before and comments about images of bodies in hell.

This is shortly followed by two gunshots. Zak believes these are coming from the soldiers since it’s illegal to shoot guns at night. Zak hasn’t been out in the woods after dark much has he?

After that scare, they regroup and go to the Hill of Death. Just for fun, Zak brings along an 8mm camera.

As Zak commands the entities to show themselves, they get a gust of wind from the storm. Further, they get the word, “Vicksburg” when asking what city they need to take.

Much excitement comes when a branch breaks in the dark. Despite misidentifying animals in the past, since they don’t see one, it must be paranormal.

Finally, they go to where Sid met evil and find a broken bone of some sort in the back of their buggy. Because they don’t know where it came from, it too must be paranormal. It couldn’t have been there and they didn’t see it. Nor could it have been kicked up with all the crap driving Zak was doing.

And so Zak concludes the area is soaked in paranormal energy and that they have tracked down evil. 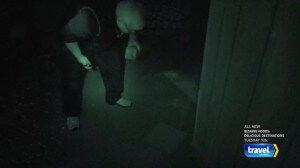 The Tour of Vicksburg continues with Zak and team at two new locations. The first is a former Elk Lodge, supposedly the home to severe negative energy and site of an unsolved murder. The second is the Kuhn Memorial Hospital, which treated smallpox patients and Civil War soldiers.

Malcolm Carson own the Lodge and tells how he makes repairs, but the next time he shows up, his work is undone. Additionally, tools go missing so he keeps buying new ones. Most would say this is the work of vandals or shoddy workmanship, but to Zak, it’s the work of paranormal spirit energy.

The first thing to note about the Lodge is that it’s completely falling apart. There isn’t a straight line to be seen or a board that isn’t rotten. However, when Zak steps inside and something falls amidst all the visible debris, he claims something was thrown at him.

He also picks up and EVP that says, “Let me get out.” How he discerns those words is beyond me.

When Zak goes to visit the Kuhn Hospital, he comments the building is the face of evil. He follows this up with conversations from two paranormal investigators. John says he had an ordeal that drove him away from the hospital and this is first time he’s been back in 4 years. He doesn’t explain that incident other than saying something was watching him.

David says he was investigating when the spirit of Michael said he was going to kill one of their investigators. Nothing actually happened to any of them, but that is their story. When Zak speaks of Michael they hear a bang. They make a frantic charge up the stairs only to stop after a few steps. Additionally, Zak says he sees someone moving down the hall.

However, the bang and figures are revealed when Zak finds two construction workers loading a dumpster.

The actual investigation is broken into two parts. Zak, Bill Chappell, and Billy will investigate the Lodge with Aaron and Jay over at the Kuhn Hospital.

Bill Chappell has come out to create an EMF vortex so he can capture it with a variety of devices. This experiment creates a lot of EMF energy that they can all feel and react to. Bill admits the effect of that high of EMF is disorienting.

And then the big evidence of the night happens, a board falls over. Zak and Billy make a huge deal that a 4×4 board of that size couldn’t possibly fall over on it’s own, it’s just too heavy. How is something too heavy not to fall?

But, it’s not too heavy for Bill, who picks it up with one hand without any strain. Zak continues to expound on how profound this evidence is and how it’s proof of poltergeist activity since there is no visible way to explain why the board fell.

Over at the hospital, Jay and Aaron send themselves into a fit as they discover someone is walking around the hospital with them. They clearly capture a figure. So clear in fact, it’s obvious it’s another person. And their big discovery for the night is a pile of Ziplock bags of poo.

Another piece of evidence they capture is something climbing on the wall. A wayward animal climbing a wall wouldn’t be a stretch for this location.

With the investigation over, all the focus is on the board falling over. Zak says the board is so heavy you need to two hands to pick it up. He’s completely wrong as we saw Bill pick it up with one hand. Zak is utterly convinced that a board falling over is the work of spirit energy and will not accept any other explanation.

Zak is free to believe whatever he wants, but this is another example of his paranormal hypochondria. He should also look up the subject of gravity. 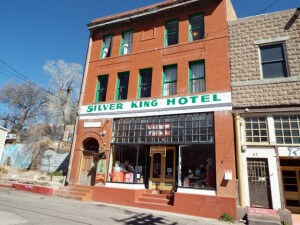 Always on the lookout for interesting Halloween decorations, I found two that really caught my fancy.  While looking around Spirit Halloween, I discovered they had a Ouija section which included shot glasses, planchettes, fleece towels and a door mat. I wasn’t sure what to do with the mat as leaving it outside might strike the wrong chord. However, I have found a brilliant way to use it all year round. Since my computer desk is glass, it makes a fantastic keyboard mat and wrist support. It’s the perfect size and makes me laugh every time I sit down.

The other is an astrology skull I found on Amazon. It’s close to the size of an actual skull, with all sorts of signs and markings. It has a good weight too it, feels sturdy and has a really unique look. It’s a dash on the expensive side, relatively speaking, but it’s well worth it because of the uniqueness.

Two more complementary items are on the way that will make very nice additions. 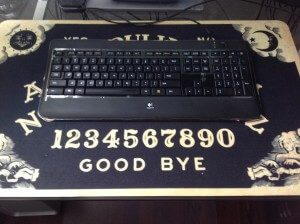 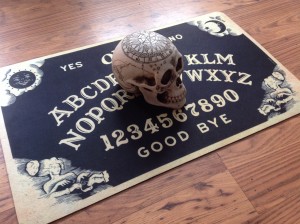