The travel channel has brought out another paranormal investigation show by the name of "The Dead Files". This takes a different approach than other shows we’ve seen. On the one side we have Amy Allen who starts off by saying she can see dead people. She’s a medium who can feel events that have taken place in a location as well as take on the feelings and emotions of those who have passed.

Stephen Dischiavi is a former New York cop who takes on the more earthly role of investigating the history of a location through record searches. He spends his time interviewing people, going to the records office and digging through paperwork. His job is to find tangible paperwork about a location’s history. If there’s no newspaper report, then maybe it didn’t happen.

They do their investigations separately then get together and compare notes.

It sounds like a really intriguing premise and for the most part it makes for an interesting comparison. For this premiere episode, we have Amy and Stephen visiting the house of Elvis (not that one) because he’s bought a bed and breakfast and he’s running into some problems. He’s seen apparitions and has experiences on the property. Now he wants to know if the place is haunted. Has he just made the biggest financial mistake of his life?

Apart from the visit from a woman in his bedroom (after having a few drinks mind you) he finds an old picture in the walls of the house. There’s nothing sinister about the picture except that it was in the wall. He’s also been building a massive table for no specific reason. He says he feels compelled to build a table that would seat nearly 20 guests. He’s also been compelled to make some wooden blocks with letters and numbers on them and seemingly cast lots with them to communicate with the dead. It’s not something he’s done before so who knows where he got this idea. The buildup is that unseen forces are pushing him to act a certain way.

Stephen talks with neighbors and Elvis seems to be a levelheaded guy. The house is extremely old so he tries to find out about the previous owners. His research takes him to the records office where he finds some sketchy details about the house.

Meanwhile, in the house, we have Amy claiming that she can see a spirit at the top of the stairs. She’s able to feel her emotions, understand her mental state and gather details of her past. She speaks of the woman being spiteful, vengeful, mentally deranged with the disposition of a sociopath. She says the woman has done some horrible things and has probably killed someone. Amy continues to pull out details of a murder, a suicide, perhaps a poisoning. Children were hurt. They were always sick.

Back at the record office Stephen, finds records of a murder – suicide that happened in 1898, where a mother tried to kill her husband and three children with arsenic.

We basically watch as these two stories collide with the same details gathered from two different schools of thought. Unsurprisingly we find out they both have the same story to tell. A mentally unbalanced woman has tried to kill her family and herself with arsenic.

For the most part this show is actually pretty interesting, but I have several production issues with how it all plays out. Amy babbles way too damn much. As she’s "feeling the room" so to speak, she’s basically rambling and incoherent. She makes wild statements and tries to create dramatic tension. Maybe that is the way these things actually happen, but watching her, she seems kind of nutty herself. It’s sort of like watching Rainman talk about the paranormal. The other part is the faux record window they keep putting over her like something you see out of Paranormal Activity. It’s a cheap gimmick and looks dumb. It’s supposed to give it that grainy, "Blair Witch" feel, but I don’t see the point. There are professional cameras there, why are we seeing this?

You also have to take a lot of this on faith. You have to be willing to accept the idea that the medium hasn’t researched all the same information ahead of time. I can hold my skepticism, but sometimes they just seem to be going for dramatic effect more than anything else.

It’s an interesting idea and I’m curious to see where this goes. I do have some questions though, if she can see dead people why are there no digital recorders running? Where are the digital IR cameras? Where is the FLIR? If it’s so easy for her to see the dead why aren’t any of the standard paranormal recording devices pointed at the spot she’s pointing at? If this woman was at the top of the stairs for so long it would have the prime opportunity to capture evidence in a fixed location rather than just walking around in the dark.

Posted in Paranormal, The Dead Files, TV | Leave a comment

There has been some confusion over the numbering of the Ghost Adventures episodes. Season 4 had more episodes than previous seasons. From everything I read, this is Episode 1 of Season 5.

I loved this episode! I mean I really enjoyed the hell out of it! For the first five minutes, I couldn’t stop laughing. They were out in the middle of nowhere, there is a cow chained to a tree and Scott Kelly is standing by the old tree dressed as an undertaker. You can’t tell me that’s not the set up to a horror movie. And, just when I think that, Nick says it and rolls up the window. Scott is so calm and with the tone of his voice, you’re just waiting for him to do something sinister. That was awesome!

Here we have the guys investigating the Ashmore Estate, which sits 180 miles from Chicago with a population of 800. It used to be an alms farm to help out the poor and abandoned. From there it was turned into a psychiatric hospital. As you might expect the hospital had it owns problems. The patients had to suffer through poor living conditions and less than ideal treatment. It’s claimed that some of the patients were actually possessed. Over 100 people died on the property and the cemetery bears witness to lives lost.

In the present day, there are two distinct incidents of people getting attacked. In 2009, a meteorologist named Kevin Orpurt came to the estate on the day before Halloween to do a special for his new station. During the night as he was sitting in a chair he was violently thrown down onto the floor and the force of the impact broke his shoulder. After that, he says he wasn’t himself and had nightmares. Was he the victim of a spiritual attack?

Then there is Bret Smock who was attacked on the stairs when they held a haunted house event at the estate in 2008. He felt something go through him and right after felt violence towards the people at the haunted house. His job was to hold a shovel and bang it around. He claims he felt like hitting people in the head with it. His family also says there was a change where he would scream during the night and have conversations with people who weren’t really there.

There seems to be plenty of things going on, what does GAC gather as evidence? Zak uses the Spirit Box to try to and communicate and gets the name "Adam". Adam seems to laugh at death. There is also the sound of a woman screaming. The voices continue to come through and lead the guys to the "upper" floor. For reasons I don’t understand, Zak then turns off the Spirit Box and starts using the digital recorder. Seems like he should have stuck with the box since it was talking to them. They hear lots of bangs and footsteps and the sound of someone coming down a ladder. It sounds like all sorts of stuff is happening.

They split up and each go to a separate floor. Nick feels like someone is scratching him, while Zak feels like someone is squeezing or pulling on his leg. There is even a voice that says, "don’t you dare touch him". Aaron is in the stairwell where Bret was pushed and he’s trying to provoke the spirits. He’s already felt something pressing down on his spine so he’s looking for more of the same.

After they regroup they get the EVPs, "don’t bring that shit down here" and "you’re gonna pay". They also capture a shadow using the digital camera. The shadow is a little dodgy for me, just because shadows really can be anything when it comes to photography. But, it does sound like they were getting plenty of responses and things were happening all around them. They didn’t get much in the way of physical evidence, but there seem to be a hell of a lot of voices out there. I’m not a huge fan of the Spirit Box, but if you believe what it says, they were having conversations with all sorts of spirits. The spirits don’t necessarily sound evil, but it does sound like they want to be left alone. They aren’t too welcoming to visitors. Quite frankly, it sounds like the perfect place to have a haunted house.

Again, I enjoyed this episode immensely and think we got a glimpse of a pretty active place.

Oh hell, so now everyone has a book

First it was Jason and Grant their exploits of ghost hunting. Then Ryan threw his hat into the ring with his paranormal adventures. We also have Zak and his trips into the darkness as well as Josh and his adventures all over the world. But not to be outdone we now have the Klinge brothers capitalizing on their 15 minutes of fame and throwing their book into the ring with " Chasing Ghosts, Texas Style: On the Road with Everyday Paranormal". I can’t even imagine how their antics will translate onto paper.

Dark World: Into the Shadows with the Lead Investigator of The Ghost Adventures Crew 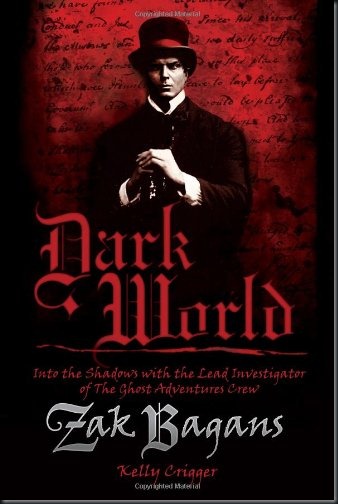 Has anyone read this book yet? I was going to pre-order Josh’s book, Destination Truth (Sci Fi Declassified) in Kindle format and am tempted to add this one as well. I read the excerpt on Amazon and it looks interesting. I sort of got the sense it might be a manual for how investigations work, but I hope that’s not the tone through the entire book. The other paranormal books really don’t interest me, but I’m curious to see what Zak has to say.